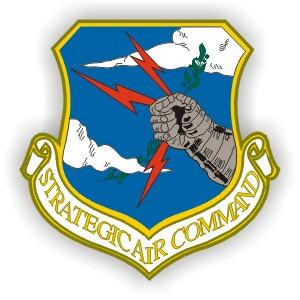 On December 18, 1974, at the age of 18, I was forced to join the United States Armed Forces, Air Force, to become a man according to my parents.  I was culturally affected by yielding into the Anglo-Saxon culture, and at the same time, an unknown world called the militia.  If you do not experience, the first phase of the training called BMT or Basic Military Training, you will not know the emotional stress that military personnel experiences during their BMT.  That December 1974, the Vietnam era was coming to an end.  I arrived at Lackland Air Force Base Texas at around 12 midnight. As usual, the Training Instructors (TI) were waiting for us — typical intimidating reception for those who don’t have discipline and never experience rigorous regulation.

I heard loud and threatening expressions like: “You are not home little girls” with a repertoire of denigrating slurs words, typical of psychological conditioning of the theorist Pavlov.  Instructions if not followed, individuals would end up in a military prison at Leavenworth, Kansas or subject to a dishonorable discharge or other than honorable.  In a few words, what the Training Instructor said (IT), was the word of “a god.”  The process according to my best reminiscence was to get the uniforms that we would use during military training and at the duty station.  We would go through a battery of medical tests, inoculation of various viral or bacterial conditions (dengue, malaria, STDs’, cholera, diphtheria, tetanus, Hepatitis A, B, C, etc…) all necessary to survive in a jungle environment.

At that time the war coming to an end in Vietnam, but not until five (5) months later in May of 1975. I still get the social and military rejection because of been in that era, and the Veterans Affair Administration keeps saying that I am not from the Vietnam era. The TI would allow us three or four hours of rest or sleep and then the welcome of the Training Instructor, again.

The only thing I can remember from that first day is that I knew what was the training about and what I would be facing.  I smiled non-stop, to whatever the sergeant would say, like the series; Gomer Pyle “.  I got the first scorned. There he stood (TI) in front of me, near my face, and asked for my last name, Amalbert Reyes, (they wrote), and kept telling me to remove the smirk off my face.  All because it would discourage the others into compliance of orders given. The TI knew right there and then that I was raised by a military environment.  From that moment on nothing was the same.  Some of my squadron companions would mock me calling names like Mongol or Mongoloid because I had an oddly shaped head after it was shaven.  I ignored their words, but those little things were accumulating little by little in my head. 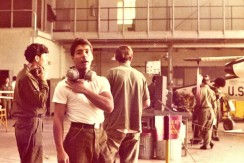 From there on, I do not remember anything else, and when I finished this first part of the training, (six weeks later), I moved on to my next training base at Chanute AFB Illinois.  The rigidity of the Training Instructors continued, for three more months.  The memories that I have of this base are very scarce; they are like taking photos in the capture in a frozen moment in time.  I have a picture of my stay in this place in Illinois, is in hard copy and have to digitalize it to make it available for posterity. 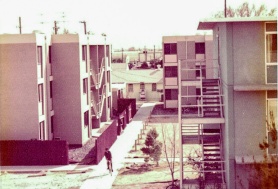 The DOD directed me to my next duty station.  I arrive at Nellis AFB Nevada, in June of 1975. This base housed the majority of fighters and bombers, F111B, C, and E, which were used repeatedly in the Vietnam War.  Not only there were the jets, but with them came the comrades who were in a combat zone while this plane fulfilled their mission in Vietcong and Saigon.  The vast majority of these comrades knew the Vietnamese language, and they shared some other word of which I still remember some (good and bad), for example; Sawadí Kap: that means how are you.

Recapitulating some behavioral conditions that they carried, several had Substance Addiction Disorder due to stressful events such as Post Traumatic Stress or (PTSD), Anxiety or Generalized Anxiety Disorder, Depression Disorder or Recurrent Depression Disorder.  I could talk about this now because I’m studied Psychology; I recognize the indicators and symptoms.  As I write these letters, I realize that I am blocking many thoughts because of the anxiety and depression that they cause me, but I manage to survive, the best I could after my military term was over.

At Nellis, AFB, I began to have my cultural and social clashes because of my origin, ethnicity and also my attitude (my pride of being Puertorrican), although I understood that what I wanted more than anything, was to do my job and do it to the best of my abilities. Then the conflicts began, not with the old comrades who came from Vietnam, but with the recruits who came from the ghetto or had difficulties relating to other cultures not their own.  I had a challenging time adjusting to this racist culture of both black men and Anglo-Saxons ethnicity.

To deal with my abnormal thoughts and emotions I resorted to the use of substances that did not suit me well, and I gave up on them after a while because my goal in the military had changed.  However, the phenomenon of anxiety and depression remained there. I tried to change my job studying something other than mechanics, although I confess that I learned many techniques and was the most talented young man of the group (but I did not see that back then, all I saw was racists demeanor against me).  I never stopped doing my work with the excellence that I demanded of myself.  It was evident that I had the lives of the pilots in my hands and I did not want to be part of involuntary homicide due to mechanical error on my part.

I then changed to the occupation that I wanted, electronics, and ended up retraining myself as a Space Communications Technician Satellites Dish transmissions.  Even today I won’t stop my fascination and passion with the world of electronics and now for human behavior. I had several accidents at the base, one that caused damage to my cervical and lumbosacral spine, another at my right knee, among others, and now my medical file does not appear anywhere.  These mere thoughts are draining me a lot, I confess, but I must focus on the present and reach my goals as best I can with the time I have.  No matter the costs, my mind will not be in the vacuum, and someone will listen to  Draókos.  All unfavorable conditions are manageable, but not heal and is a moment to moment endeavor.

I finished my tour of duty from military service with an honorable it was a  relief.  I now recognize that I was working with my adverse condition for a long time.  I found peace in the studies of Accounting, Computer Science, Financial Management and finally Counseling Psychology.  Subjects that interested me the most so as not to think about what was overwhelming me. However, not thinking about it is not a solution, as I have discovered in the hospital for Veterans in Puerto Rico and institutionalized at the Panamerican Psychiatric Hospital.

Learning to handle thoughts is something that requires a lot of effort and discipline, both I have, but after all, I am just a human being who feels suffer and work daily with emotions. I need to face my negative thoughts and classify them, placing them in their place, I know they are there, but that will not bother me or make my path impossible; Acceptance and Commitment Therapy (ACT).

It is not until February 2004, 18 years later, that I discover for the first time, that the Veterans Affairs Hospital, supplied services to veterans who served more than 90 days straight active duty service.  Imagine my surprise when they told me that it was always a benefit. When I had my first incursion with the personnel of the VA at the Chardon Building in Hato Rey, in or about 1982, they told me that I was not entitled to any benefits except education and the certificate of eligibility for the purchase of the first home, nothing more. When I arrived in Puerto Rico (noviembe1980), I received another cultural shock just for being a person sure of myself, for believing in my acquired skills to give and contribute positively to the society to which I thought I belonged. Understand, I was not offered work because I did not have an academic degree, work experience or preparation to be employed.

I was fighting for what society had imposed on me — rejected on many occasions.  When I had a job, my compulsiveness and organized way of doing task offended management when I exposed my points of view about inefficiencies and other procedural methodologies to improve on the company’s goodwill… what a fool I was.  The only thing companies care about is the money they could produce at the expense of others no matter the consequences.  A veteran of the Vietnam era? How gives a SHAT about the opinion of a veteran?  Can something be done about a society lacking its own identity and insecurities? I resigned myself to this information provided by the Department of Veterans Administration in Puerto Rico, as a good soldier that I was and I took advantage of the only thing that was within my reach, the right to study.

Well, it’s good that everything happened in the path. I took full advantage of GI Bill and dedicated myself, body and soul to my academic education. First, to test the water, for the fear that I had of the University, I studied an Associate Degree in Business Administration and Accounting, from ICPR Junior College of Hato Rey. Having finished this course and my excellent performance, I decided to take on a more significant challenge by entering something I enjoy, technology. I enrolled in the Universidad Interamericana, in Rio Piedras Puerto Rico, to study a Bachelor of Science with a concentration in Computer Science, again not with the excellence I expected, but 3.14 gap. This score Is good.

My desire to continue studying arose and I decided to do a Master’s in Financial Management at the University of Phoenix campus of Guaynabo, here again, I exceeded my expectations and ended up with a gap of 3.84. Now at age 56, I decided to study another branch of science that fascinates me, human behavior and all the complications of disorders that have accompanied me most of my life after been discharge from the USAF, I have finished my Master’s Degree in Psychological Counseling.

Although late in my life I realize that I am passionate about this subject.  It has served as psychoeducational therapy to deal with my ghosts and restructure my programmed constructs.  Guide others voluntarily with my life experiences, from, and way that I have been able to survive in hostile, prejudicial, unjust and hypocritical environments contributing without ceasing, although one at a time that can help is excellent.